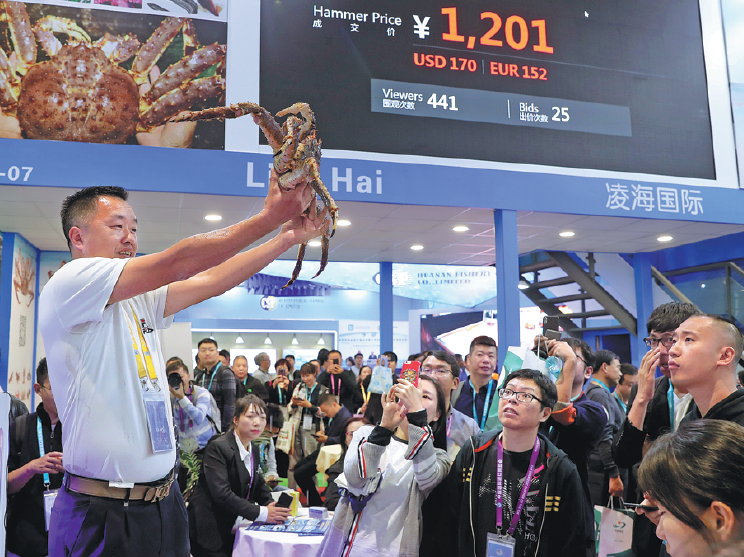 A king crab from Russia sells for 1,201 yuan ($172) at an auction during the second China International Import Expo in Shanghai on Thursday. [FENG YONGBIN / CHINA DAILY]

Red bean-stuffed cookies, chocolate bars with chili fillings and fish-flavored pizza pies are just a few examples of how global food titans are sparing no efforts in catering to discerning Chinese palates.

With China being a key part of their growth strategies, deciphering consumer propensities and marketing them correctly is the Holy Grail of snack success for international food and beverage players attending the second China International Import Expo in Shanghai.

"Chinese consumers have become more aware of quality," said Joost Vlaanderen, president of Mondelez International China, the company behind Oreo cookies. "They like products that are designed for them, and they are willing to pay a premium."

"Even the (Chinese) name of this product comes from Chinese online shoppers. The so-called customer-to-business model is how we derive our consumer insights and e-commerce is more than a venue for sales, but also a channel for the next great innovation," he said.

China's food and beverage industry is expected to grow at an annual rate of 13.8 percent from now until 2023, resulting in an annual market volume of $37 billion in 2023, according to research firm Statista.

"E-commerce has become a particular pillar for our consumer brands and an important part of our growth strategy," said Robert Spurway, chief operating officer for global operations at Fonterra, whose company has signed major deals with Chinese tech gurus from Alibaba to JD during the ongoing fair.

The New Zealand-based dairy giant debuted cheese bars that are meant to appeal to Chinese children. This is in line with China's consumption growth and pursuit of quality products that are healthier and more nutritious, Spurway said.

It is important to gain consumer insights through data analytics and listen to social media to navigate the largest market outside of our home turf, said Clarence Mak, president of Mars Wrigley China, a business unit of Mars.

"One winning recipe for F & B brands is to ride the revivals of tradition, nostalgia and the 'Chinese pride' trends that are in full swing," said Daisy Li, an associate director at consultancy Mintel.

China-derived innovation is generating positive spillover effects. For Mondelez, the lighter, crispier and easier-to-digest Oreos inspired by China's healthy-eating practices are also warmly received in markets outside of China. And for the Mars bar, green tea and strawberry flavored versions are gaining traction.