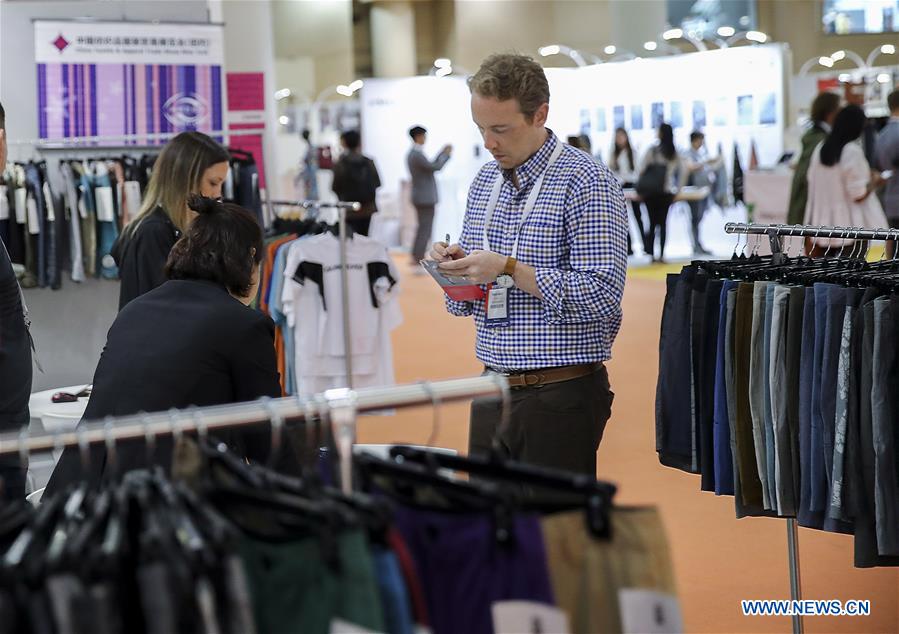 An American buyer takes notes at the booth of a Chinese clothing producer at the 2018 Chinese Textile and Apparel Trade Show in New York, the United States, July 23, 2018. (Xinhua/Wang Ying)

Like Kevin Cheung, vice president of a New York-based clothing company, many in the U.S. fashion and apparel industry breathed a sigh of relief amid the temporary trade truce coming from the consensus reached by the presidents of the United States and China on the sidelines of the recent G20 summit.

On Dec. 1 in Buenos Aires, Argentina, the two leaders agreed not to impose new additional tariffs and to step up negotiations toward the removal of all additional tariffs, which means tariffs currently levied at 10 percent by the United States on 200 billion dollars of Chinese products will not rise to 25 percent on Jan. 1, 2019.

HARD TO SHIFT FROM CHINA

Cheung was in Paris on Sept. 24 when the 10-percent additional tariff imposed by Washington on 200 billion dollars of Chinese imports took effect. Items hit by the tariff include handbags, backpacks, luggage, hats and baseball gloves, among others.

In response, China also imposed higher tariffs on some 60 billion dollars of U.S. goods, with 5 percent increase for some items and 10 perent for the others on a list of targeted products.

The initial response of the young company manager was to cancel his birthday celebration and call his broker to see which categories would affect his business.

"It did not include apparel, so for now we're pretty safe," Cheung recalled in a recent interview with Xinhua at his office in downtown Manhattan.

Amid the tariff disputes between the two largest economies, the risk of cost escalation, however, was too high for the family business, which was started by Cheung's parents and has Chinese partners for over 20 years.

As part of his mitigation tactics, Cheung has started to diversify his company's supply base. "It is not really easy to shift from China on our side," Cheung said. "We have such a wide range of customers, we really depends on the skill level that China has offered us, and so it is not going to be easy."

No other country in the world has the infrastructure that China has, which makes it the best at producing apparel, he said, adding that apparel companies can diversify their sourcing in countries such as Vietnam and Bangladesh, but "when it comes to novelty yarns, novelty fabrics, they still import from China."

According to Cheung, the U.S. economy has a huge market for more moderate and upper moderate goods.

"The true reality is (that) China finds a way to really turn that Italian novelty original yarn into something that's acceptable to (American) customers that can only afford a T-shirt for 9.99 or 19.99 U.S. dollars, and sweaters anything from 19.99 dollars all the way to 69.99, 80.99 dollars," he noted.

"So manufacturers such as us, such as other people on Broadway, the Seventh Avenue, are all dependent on China...because the innovation (in China) is so much faster, so much steadier, so much more...compared to other countries," he said.

For now, the anxiety of Cheung and his industry counterparts over tariff hikes is put on pause, but uncertainties emanating from the trade tensions remain.

China and the United States stepped back from the brink of confrontation and sought to forge a working partnership to benefit both countries and the world, Robert Kuhn, a China expert and Chairman of Kuhn Foundation told Xinhua recently when referring to the Xi-Trump meeting on the sidelines of the G20 Argentina summit.

"No one should underestimate the difficulties of the work ahead: the structural complexities and divergent perspectives go well beyond the trade deficit. But with both presidents making a personal commitment, and both putting their personal credibility on the line so publicly, one can be justified in feeling optimistic, at least at this moment," Kuhn said.

The ability of fashion brands and retailers to respond to the tariffs is complicated since apparel and textile supply chains are complex, involving inputs from multiple countries, industry analysts said.

"It takes at least two to five years to identify and approve a new vendor, because we are a long way from the days when apparel could be made any place (where) there were workers and a sewing machine," Julie Hughes, president of the U.S. Fashion Industry Association (USFIA), told Xinhua.

"In most cases, there are no alternative sources of supply for U.S. companies," she said, calling the tariffs "the top uncertainty and risk of volatility" that USFIA members see in the economy.

"It's definitely a concern for everyone, we expect things to be resolved in a timely manner," Cheung said. After all, the relocation of factories and sourcing partners from China could potentially disrupt the U.S. fashion company's supply chains as well as affect shipping times and sourcing strategies, he added.

"The uncertainty that has been created with the threat of tariffs is almost as troubling to markets as actual tariffs," wrote Gail W. Strickler, president of global trade for Brookfield Associates, LLC., in an article carried by sourcingjournal.com on Dec. 11.

Imports at the U.S. major retail container ports have set another new record in October, reaching 2 million containers in a single month for the first time as retailers continued to bring merchandise into the country ahead of a now-postponed increase in tariffs on goods from China, according to the monthly Global Port Tracker report released on Dec. 7 by the U.S. National Retail Federation and leading consulting firm Hackett Associates.